Paul seemed to have it all – creativity, an Ivy League education, career success and a glamorous life. But a deep and relentless depression made him feel that life was not worth living. He turned to psilocybin as a last resort.

Between bouts of crying, and with friends holding him on either side, Paul* choked down the capsules for his third and final trip, two at a time. “At first I spit them out.” The fear of subjecting himself again to sheer terror was too much. “Getting myself to take those pills that day was, without a doubt, one of the most difficult things I have ever done.” he says.

His first two trips at MycoMeditations had been frightening, panic-stricken episodes. After the second ended, he’d found himself crying and had not been able to stop. But he’d come here to get better. And everyone else seemed so happy. He had to keep trying.

One could be forgiven for thinking Paul’s life has been charmed. The child of a renowned artist father and conservatory-trained pianist and biochemist mother, he grew up in bohemian Greenwich Village, attended progressive elite private schools, partied in the heady gay scene of the early 1980s and attended an Ivy League university as a graduate student. Now in his late fifties, Paul has had a successful career in the arts, and many of his achievements have been lauded in the press.

But depression, anxiety and anger have cast long shadows over a life punctuated by trauma. Looking back, it’s not hard to see where the ruptures began. A highly sensitive and intelligent boy, he struggled with reading and was bullied. His father’s alcohol-fueled rages ultimately resulted in his parents’ separation. A relative-turned-caretaker sexually abused him from the age of 10, during a period when his mother was suffering a series of debilitating strokes. After years of illness, she died when he was 16.  Paul says he didn’t tell anyone about the years of abuse for decades, not even the therapist he saw twice a week through high school. “I compartmentalized it and didn’t think about it.”

While at graduate school, his friends started getting sick, and then dying of AIDS. “Watching people get ill was scary, we were all powerless but did our best to be there for each other,” he says. In the background were both a constant fear of getting sick and guilt for being healthy. The gay community was being decimated, and among those who died were close friends, roommates, former partners and the friend who’d mentored him in high school.

Drugs and alcohol had long been part of his coping mechanism, but in his 30s he acquired a cocaine habit. “I always drank a lot, but for a few years I was heavily into cocaine. All the while I was unbelievably depressed, wondering why I hadn’t killed myself yet, not really wanting to do it but finding it harder and harder each day to find good reasons not to.” When he returned to New York he experienced the shared trauma of 9/11 and shortly thereafter got sober with Alcoholics Anonymous. He remains sober today, but the depression and anxiety that have accompanied him since childhood never left. “Over the years I tried every anti-depressant under the sun. None of them worked for me,” he said. He saw many therapists over the years too, but found that “talking and talking about my issues seems to just make them bigger. It doesn’t resolve them.”

In his commitment to sobriety, he initially refused to consider treatment with psychedelics, but after consulting with doctors and others in the recovery community, Paul decided to give it a shot. First he did ketamine therapy, which worked – but only for “one glorious month”. Nevertheless, Paul believes ketamine can be an important intervention, particularly as an emergency treatment for those who are suicidal.

Discouraged from entering a psilocybin trial where the real objective is gathering data from subjects rather than ongoing therapeutic support, he opted instead for an ayahuasca retreat in Peru, where he dosed six times over a period of two weeks. During some of those trips he was petrified, convinced that he was poisoned and dying. Although the retreat felt ultimately beneficial, the depression returned, and with it came anger. This was worsened by life challenges including financial stress.

Wanting to give psychedelics one more try, and on the recommendation of a friend who’d had a positive experience, Paul signed up for a MycoMeditations retreat, where he found himself in the company of others many of whom were in their 60s and 70s. At first he didn’t think the group had anything in common, “but by the end we had all bonded very deeply.”

But during his first trip Paul began to feel the familiar panic and terror he had experienced in Peru. A facilitator held his hand to calm him. “Although I know now there’s no such thing as a bad trip, only a challenging and difficult trip, I didn’t have a very good experience. That night I was crying, thinking I don’t know if I can do this. I felt hopeless.” What’s worse, he found out that a friend had just died.

During the second trip he took a higher dose and found himself in an even more frightening place. “I was consumed by this terror. The feeling was unbearable. But I wasn’t in physical pain or anything, in fact when I would scan my body or try to identify what was wrong, I couldn’t.” He was attended to throughout by someone either holding his hand or touching his leg. “Finally, I did reach a place of peace.” But it felt more like survivor relief than pleasure.

“That night the crying started again and continued throughout the next day. Before and during integration, I was sobbing and sobbing. It was weird, embarrassing,” he says. “I could not stop. It was bottomless. I was crying not for myself anymore but for everything sad in the world, everything, even the bird eaten by the cat. I completely fell apart.” This experience of properly feeling his feelings was a release, a purge, he says. “It was very different from the ruminating about my depression, which I’d done with friends and therapists.”

No wonder his reluctance to embark on a third trip. Encouraged by lead facilitator Justin Townsend this time he listened to the Johns Hopkins playlist. “As I listened I gradually found I was okay. It was a completely different experience. Amazing,” he recalls. He’d seen menacing shapes and a dark, scary, “funhouse” environment on the previous journeys. This time he felt that those were fakes, decoys, and that he need not take the bait. There was really nothing to be frightened of. “There were times when I felt I might panic but I was able to float through it. In my past trips I’d always yearned to become part of the earth, to merge with the ground and become one with it. This time I was able to.”

“I began to see beautiful landscapes and gardens, magical cartoonish tropical worlds. And instead of being an observer at the center of my world, I felt like I was just a small part of this wonderful place, like a leaf in the bottom corner of a great painting, nothing special.” “I felt an incredible peace, like there was a breeze rushing through me, washing me, cleaning the space between my cells. It was remarkable and transformative. Incredibly powerful,” he recalls.

Reflecting on the experience some weeks later, Paul believes all his trips, as well as the crying episodes, were part of one ongoing process. “Each piece was dependent on the piece before it,” including the ketamine and ayahuasca experiences.

“Justin and Abbie (Justin’s wife) were amazing to me; I feel so deeply grateful to them. I cannot speak more highly of them.” Whereas before he felt beaten down, he now feels able to address the challenges he faces. “I really do feel changed. It was a very intense experience. I have some big decisions to make coming up but I feel that I can now start thinking about them. I’m in a much better place than I was before. I have ups and downs but I seem to be more resilient.” He’s started meditating and getting back into yoga.

Paul says he doesn’t think he’s cured, but has hope and plans to pursue psilocybin therapy. “I think a lot of sober people might see psilocybin therapy as anathema to sobriety but I don’t see a conflict. I still consider myself sober.”

* His name has been changed. 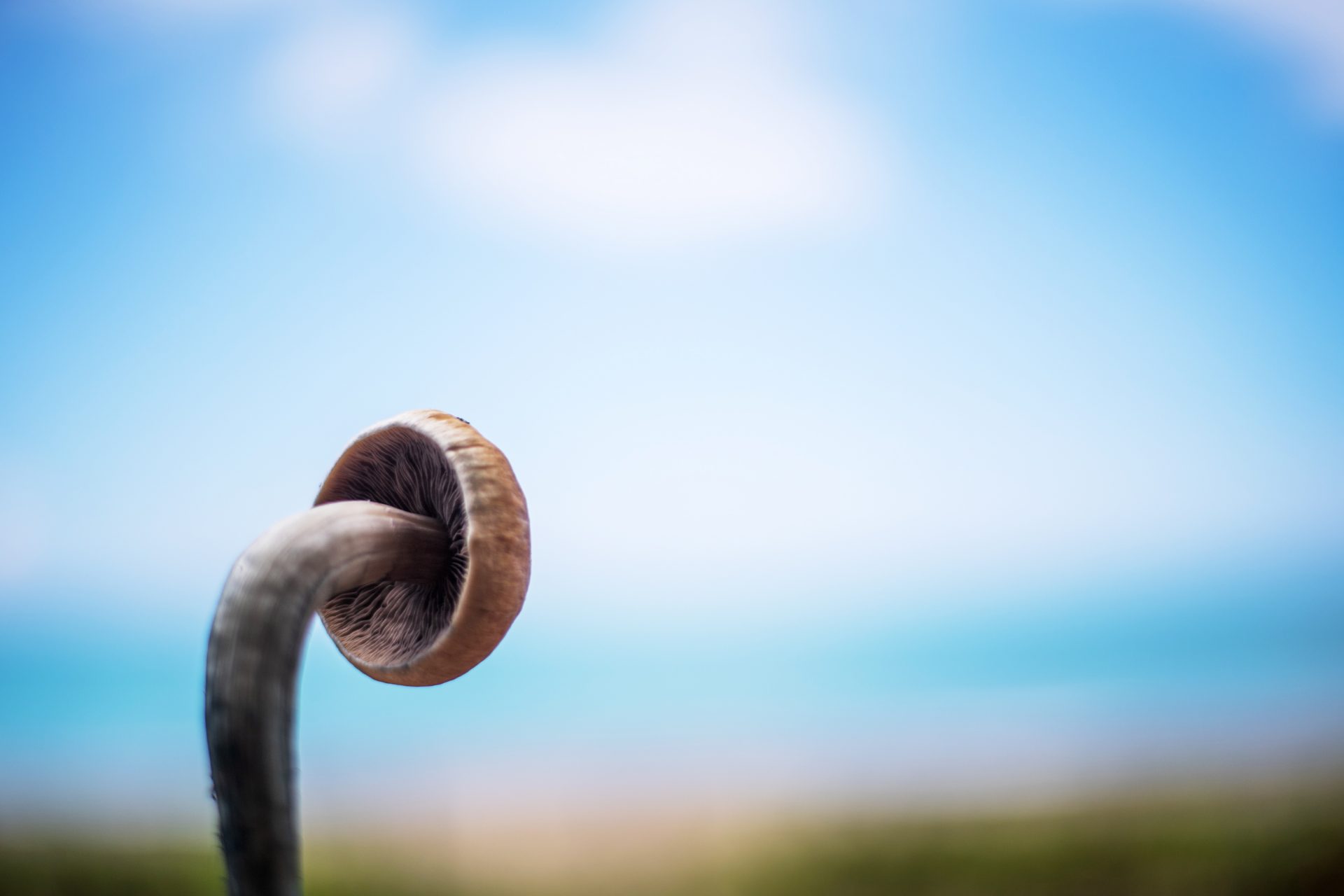